Consumer Insolvency Filings Spike In Canada, And It's Likely Just The Beginning

It happened sooner than the experts predicted.

There were 11,641 consumer insolvencies in October of this year, up 9.2 per cent from a year earlier, according to data from the Office of the Superintendent of Bankruptcy. The insolvency numbers include both bankruptcies and consumer proposals, an alternative to bankruptcy that has become popular in recent years (see below).

It's the largest number of consumer insolvencies for the month since at least 2010.

"High consumer debt levels and rising interest rates have been a growing concern over the last few years and we are now starting to see this reflected in the number of insolvent Canadians filing bankruptcies or proposals," said Chantal Gingras, chair of the Canadian Association of Insolvency and Restructuring Professionals (CAIRP).

British Columbia and Prince Edward Island led the way on the increase, with around a 20-per-cent increase in insolvencies in both provinces. Newfoundland was the only province where they declined from a year ago. 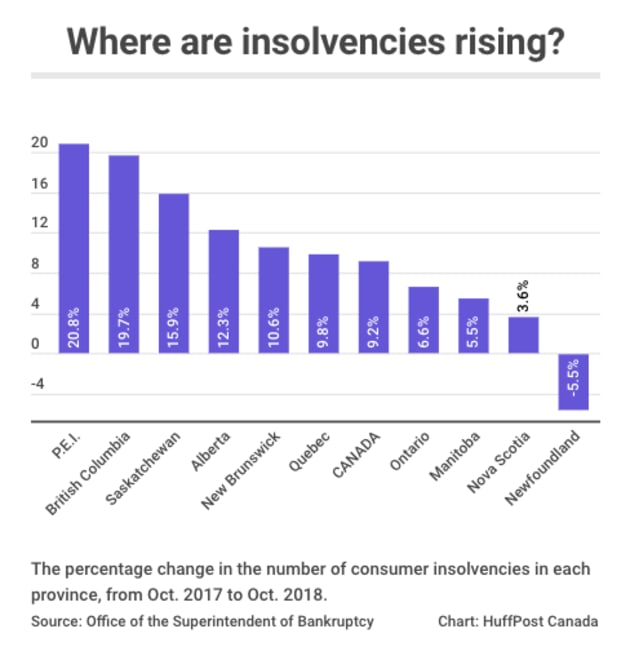 In a report last month, CAIRP predicted that consumer insolvencies would start rising early next year, roughly two years after the Bank of Canada began raising interest rates. The group said it typically takes that long before interest rate hikes start to make themselves felt.

Gingras told HuffPost Canada last month she expects to see insolvencies rise into 2020 and beyond, because the Bank of Canada has continued raising interest rates, most recently raising its key lending rate in October, to 1.75 per cent.

CAIRP, which represents nine out of 10 licenced Canadian solvency trustees, said 97 per cent of its membership expects insolvencies to rise in 2019. Ninety per cent agreed that Canadians "possess unhealthy levels of debt."

However, with mortgage rates on the rise and new mortgage rules slowing down the housing market, there are signs Canadians have slowed the pace at which they are taking on new debt. The pace of consumer debt growth has fallen to its lowest in 35 years, according to recent data from the Bank of Canada.

Consumer proposals are an alternative to bankruptcy ion which troubled debtors strike a deal with their lenders to pay back some portion of their debt over five years. Creditors will often accept these proposals because they can often get more of their money back than with a bankruptcy.

It's also easier to keep your house under a consumer proposal. Under bankruptcy, consumers are often forced to sell their homes.

Financial experts say it still makes sense for some people to file for bankruptcy. Typically, consumers are released from bankruptcy within 18 to 20 months, while consumer proposals last five years, and only after that does an insolvent consumer start rebuilding their credit.

While most market experts expect the Bank of Canada to keep hiking interest rates, some weak economic data recently is casting doubt on just how aggressive the rate hikes will be. In a report last week, TD Bank suggested Canada's central bank may delay its next rate hike to April, from an expected rate hike in January.

Next year "is likely to represent the peak level of interest rates for the U.S. and Canada," the TD Bank economists wrote.

The Toronto Real Estate Market is Suddenly on Fire Again...

How is Toronto Real Estate Hot With Unemployment at 14%?...

Chinese scientist who was removed from Canadian lab sent deadly viruses to Wuhan Institute of Virology...