The Conservatives began the campaign with big hopes for Quebec. They revamped their image in the province and spent months recruiting high-profile local candidates.

Leader Andrew Scheer even launched his bid to become prime minister from Trois-Rivières, Que. It was just the kind of mid-sized city where the Tories felt their promises would resonate.

But that was before Scheer took part in a French-language debate last week that was broadcast on the most widely watched television network in the province.

Over the course of the two hours, Scheer dodged questions on abortion, tried to sell Quebecers on an unpopular oil pipeline and advocated limits on assisted dying in the province that first drafted legislation on the issue. And all this in his second language.

The reviews were brutal. Francophone pundits declared Scheer had just killed his party's chances of making gains in the province, while editorial cartoonists ridiculed his pro-life stand.

He was depicted as a priest in one of the cartoons, a particularly unflattering depiction given the importance secularism has become to Quebec's identity. 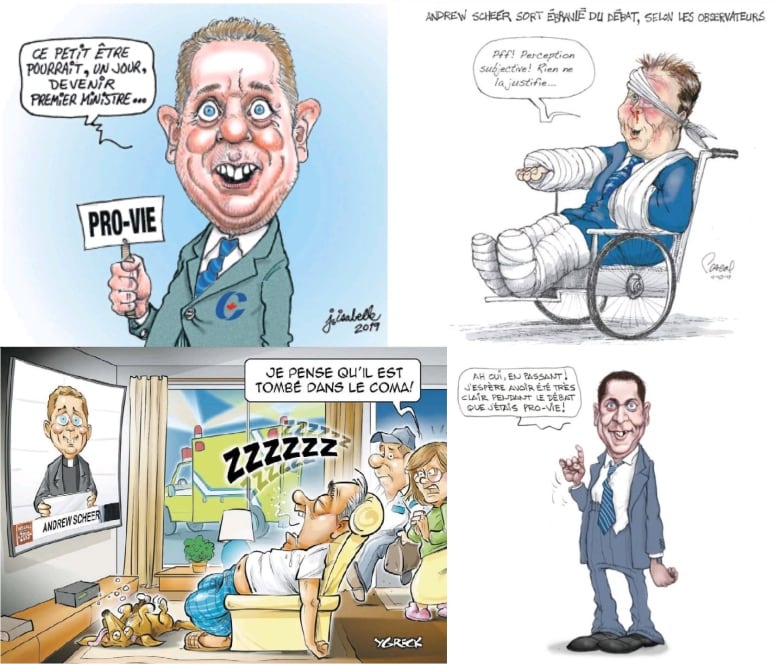 Editorial cartoonists ridiculed Scheer's hesitation in the TVA debate to acknowledge that he personally opposes abortion. He clarified his beliefs the following day. Scheer has promised that, as prime minister, he would not reopen the abortion debate. (CBC)

Tonight, Scheer will once again have the chance to debate the other leaders in French. The event begins at 8 p.m. and will be broadcast on several media channels, including Radio-Canada.

His party's hopes in Quebec, and Scheer's own ambitions to become prime minister, may hinge on delivering a performance that erases the memory of what happened last week.

It's in ridings like Trois-Rivières, roughly half-way between Montreal and Quebec City, where Conservatives candidates are likely to feel the effects of the TVA debate.

The Conservatives have a star candidate here in Yves Lévesque, who ran Trois-Rivieres for 17 years as a no-nonsense mayor. But now he's locked in a tight race with the Liberals and the Bloc Québécois — all vying to steal the riding from the NDP incumbent.

Lévesque says he's been trying to compensate for Scheer's popularity issues by encouraging voters to look at the party's platform, with its promises of lower taxes, balanced budgets and go-slow approach to addressing climate change.

"Maybe he's not as charismatic, as emotional as we would like. But will he do a good job? That's the question," Lévesque said in a recent interview at his campaign headquarters. "He will do a great job. He built a great team." 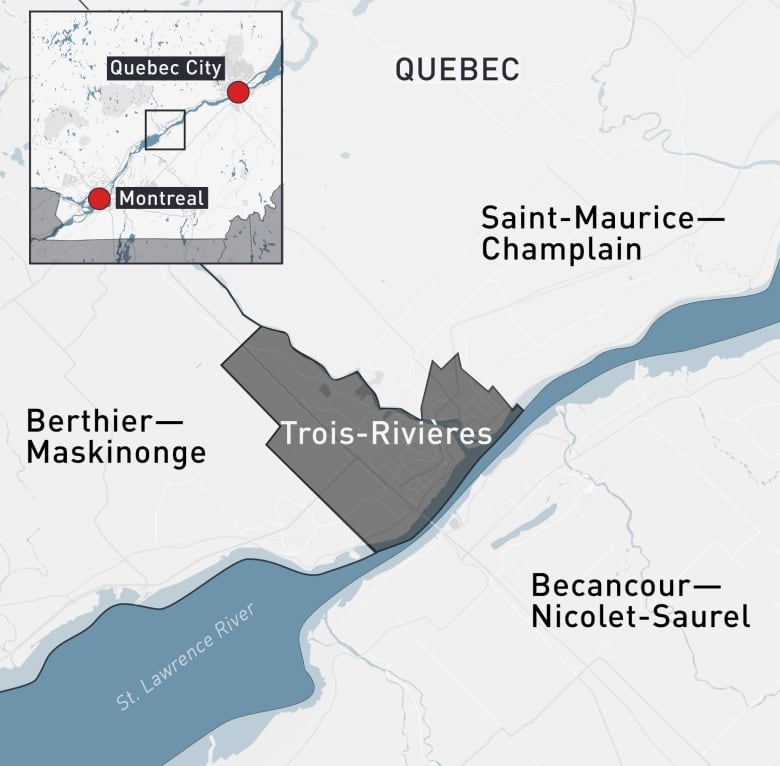 But for many voters in Trois-Rivières, Scheer's performance in the TVA debate left a negative impression.

Along Trois-Rivières's historic main street, others who watched the debate singled out the exchange over abortion. "It took him a while to say he was pro-life. I think that hurt him," said one man.

And in the studios of FM 106.9, popular lunch-time radio host Rober Pilotte said Scheer had done his local candidate no favours by struggling to get his points across in French.

"Yves Lévesque now has the wind in his face," Pilotte said.

When the Conservative Party set about drafting an election strategy for Quebec around a year ago, they opted to revive a figure from the party's halcyon days: the Bleu.

The name comes from the party George-Étienne Cartier merged with John A. Macdonald's Liberal-Conservatives, forming in the process the basis of the modern Conservative Party. 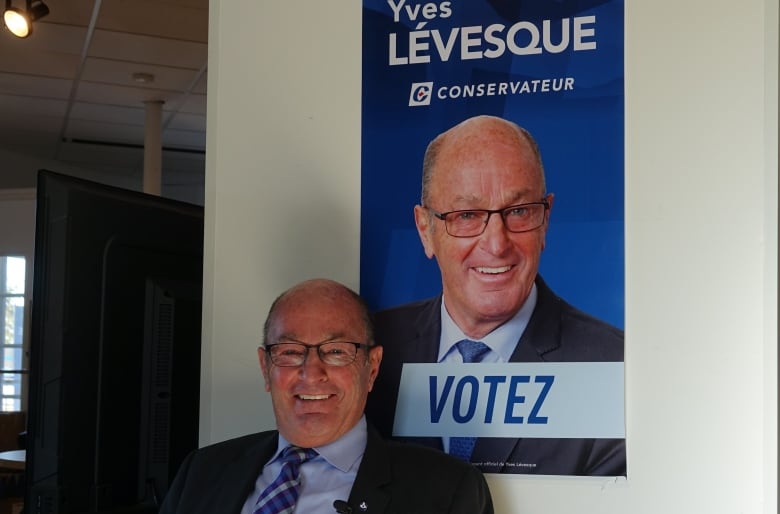 Yves Lévesque was the mayor of Trois-Rivières, Que. between 2001 and 2018. (Jonathan Montpetit/CBC)

In more contemporary circles, a Bleu describes the kind of fiscally conservative Quebec nationalist who rallied to Brian Mulroney's Progressive Conservatives in the 1980s, helping him to back-to-back to majorities.

With the Bloc in a state of disarray last year, giving the Conservative Party a bleu makeover appeared like a good way to build on the 10-seat toehold leftover from the 2015 election.

So the party adopted a number of proposals designed to appeal to these nationalist Quebecers: French-language protections, a single-tax form and, more recently, a hands-off approach to Quebec's new secularism law.

This election, in many ways, is a test of the marriage of the Bleu tradition in Quebec and the social conservatism that forms Scheer's base in Western Canada.

Scheer's debate performance last week, with his anti-abortion beliefs making headlines, may have made it seem to Quebecers that it is the socially conservative side of the party that holds sway.

"It's not a selling point in Quebec to be talking about abortion, even it was the other parties putting words in his mouth," said Pilotte. "In Quebec, we've moved on to other things."

Can the local candidate compensate for an unpopular leader?

Lévesque's own trajectory from the municipal to the federal arena further illustrates the difficult fit between Scheer's policies and the progressive attitudes Quebecers hold on several issues, such as the environment.

While he was mayor, Lévesque opposed the construction of a cross-Canada oil pipeline through Quebec. A similar project is at the heart of the Conservative platform.

But Lévesque's decades in municipal politics, never mind the force of his personality, may be enough to counter ambivalence about Scheer. 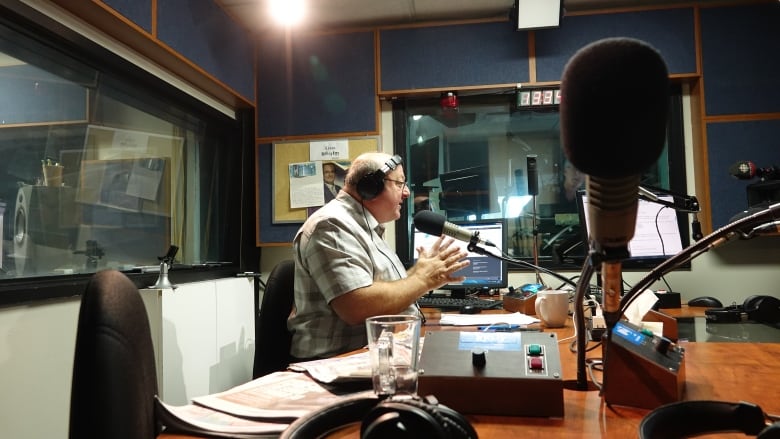 'Wise is the one able to predict what will happen in Trois-Rivières,' said Robert Pilotte, a popular local radio host. (Jonathan Montpetit/CBC)

Lévesque doesn't so much answer questions as deliver an onslaught of words. And when it comes to his party, and its leader, he is nothing less than effusive.

"Look, I'm telling you, if you have time, which you don't have time, but just [look at] the candidates we have in Quebec," Lévesque said during an animated early-morning interview earlier this week.

"We have the best candidates with the best knowledge and that makes us a great team. That's what makes the car. It's a Conservative car. But what makes it turn right is the people in the car with our chief, and our chief listens to us. Mr. Scheer is a great listener."

Asked if he was willing to bet on who will win the race in his riding, radio host Pilotte declined: "Wise is the one able to predict what will happen in Trois-Rivières."

Terence Corcoran: The Trudeau Liberals will have to live with being in breach of a UN declaration they should never have adopted...