Since Andrew Scheer was elected leader of the Conservative Party, a lot of attention has been paid to his positions on pipelines, taxation, the environment, immigration, abortion and LGBTQ rights — some of which are more well-defined than others.

Not much attention has been given, however, to his position on innovation and research and development — or R&D — an issue that’s of crucial importance to Canada’s economic future.

Scheer’s position on innovation and R&D is one of non-intervention, as he shows no inclination or desire to invest in these activities. Nowhere in his platform are there policies to support scientific research in Canada’s universities, nor are there policies to support innovation in high-tech industries such as biotechnology, life sciences, advanced manufacturing, digital technology and artificial intelligence.

For the past two decades, Canada has spent between 1.5 and two per cent of its gross domestic product on R&D, considerably less than other OECD countries. In order for Canada to strengthen its position in the global economy, it must increase spending on R&D in both the public and private sectors.

If Scheer is elected prime minister, he will allow R&D spending in Canada to continue to lag behind other countries. This will not only hurt the competitiveness of Canadian industry in the global economy, but will also make it impossible for Canada to break free of its economic dependency on fossil fuels.

There is also a possibility that Scheer will undermine state-sponsored R&D programs and agencies like the National Research Council (NRC), the Canadian Institute for Advanced Research, the Innovation Superclusters Program and the scientific research tax credit. These programs and agencies, some of which have illustrious histories, are key to Canada’s future economic prosperity.

The Canadian federal government has a long tradition of supporting scientific research and technological development, beginning with the creation of the NRC in 1916. The original function of the NRC, which was staffed by scientists from different Canadian universities, was simply to inform the Privy Council and Cabinet about new scientific and technological developments. 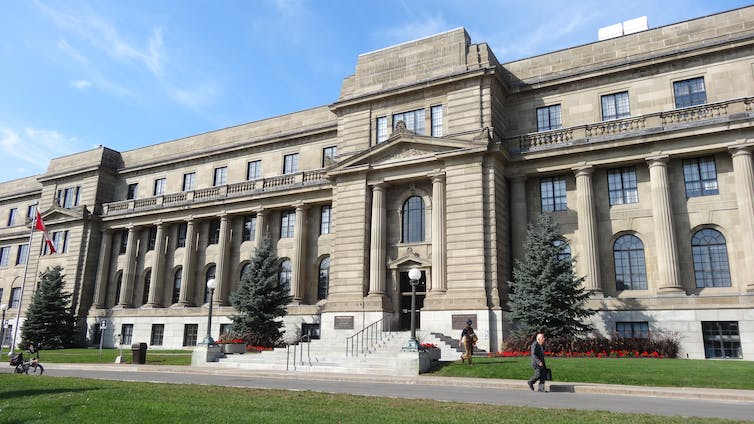 The National Research Council of Canada Laboratories, completed in 1932 at 100 Sussex Drive in Ottawa, was classified as a federal heritage building in 1988. JustSomePics/Wikimedia Commons

In 1932, the NRC established its own research laboratory on the Ottawa River, and assisted Canadian industry by testing and analyzing various raw materials. In addition to advising cabinet on scientific matters and carrying out materials analysis, the NRC handed out grants to academic scientists and to private businesses engaged in scientific research.

In the 1960s, the NRC was criticized for funding science projects of little value to industry, and for favouring “basic research” over “applied research” or “industrial research.” In response, the NRC increased grants to private businesses and established much closer ties to the Canadian business community.

Reforming the NRC was just one of many initiatives taken by Brian Mulroney’s Conservative government to support innovation and R&D. The Mulroney government also established the National Advisory Board on Science and Technology, and incentivized R&D spending in the private sector by introducing the Scientific Research and Experimental Development (SR&ED) tax credit.

Perhaps the most important initiative was the funding of “National Centres of Excellence” — research organizations that bring together academic and industrial scientists.

Like Mulroney, Jean Chrétien was committed to making the Canadian economy more innovative. During his first term in office, the Liberal prime minister made the National Centres of Excellence program permanent and strengthened the ties between the NRC and private business.

Chrétien’s industry minister, John Manley, announced a plan to create a “national system of innovation” — a nationwide network of researchers and scientists who work together on innovative projects. Unfortunately, this plan never came to fruition, as it was jeopardized by the government’s deficit-fighting agenda.

Setting aside the question of whether their innovation polices were effective, Mulroney and Chrétien took innovation seriously, and understood that Canada cannot be a prosperous nation without making major investments in R&D.

This was not the case with Stephen Harper, who sidelined innovation policy during his nine years in power. As many of Harper’s critics in the science community pointed out, Harper cut funding and personnel at the NRC and the Natural Sciences and Engineering Research Council (NSERC) and allowed the SR&ED tax credit to fall into disuse.

With the election of Justin Trudeau, the federal government has renewed its commitment to promoting innovation and R&D by dedicating $950 million to a national “innovation superclusters” program.

For many decades, the Canadian federal government created public agencies and programs designed to stimulate innovation in the Canadian economy.

Although these agencies and programs were sometimes underfunded and experienced stagnation, they helped give rise to a number of amazing technologies such as radar, pacemakers and artificial intelligence. In doing so, they contributed to the diversification of Canada’s economy and made it possible for Canadian industry to compete in certain high-tech sectors of the global economy.

Canadians who are concerned about Canada’s economic future should look at Scheer’s candidacy with foreboding.